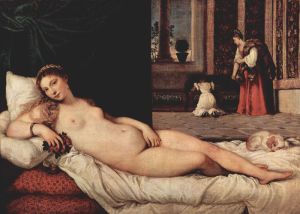 Tiziano Vecellio was a Renaissance Italian painter, acknowledged as one of the greatest examples of the venetian school. Some books speak of him as the first venetian artist that had achieved international fame. He became well known for his portraits and landscapes, but his work is also defined by his religious or mythological motifs.

The painting The Venus of Urbino belongs to the consolidation period of the artist, which lasted from 1530 to 1550, when his style becomes more dramatic. Here we see one of Tiziano’s favorite themes, the roman goddess Venus, whom he painted several times, as a consequence of his travel to Rome and his fascination with its mythology. The canvas, inspired by the Sleeping Venus from Giorgione, shows Venus laid down in a bed, with a little dog sleeping at her feet and, behind that scene, there is a girl looking for something in a chest under the attentive look of a courtier.

The key of the painting, however, is in the sexually-suggested look of the Venus that, accomplice, invites the spectator to possess her… what’s mythological and ideal merge with what’s more human and carnal. Mark Twain, in a travel journey called A tramp abroad, states this work as “”the vilest, rudest and obscener painting in the world””. We would believe that Mark Twain was not very fond of strong emotions but, what I’m about to tell you, is darker: this painting was asked from Guidobaldo della Rovere, son of Francesco María della Rovere and Eleonora Gonzaga, duke and duchess of Urbino. Some studies claim that the Venus is a portrait of the duchess Eleonora. And there is a question: how twisted is for Guidobaldo to request a painting of his mother and that Tiziano would have painted her with a sexually-provocative look? Or Guidobaldo or Titian, someone, had serious issues.

This entry was posted on July 10, 2010 at 12:48 and is filed under Mannerism, Renaissance.You can follow any responses to this entry through the RSS 2.0 feed.You can leave a response, or trackback from your own site.