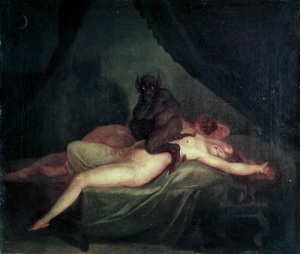 Tell me: don’t you think this painting is awesome?

The Dane Nicolaj Abildgaard studies in the Royal Danish Academy of Art, where he wins a gold medal for his achievements in 1767. This prize included a trip to further perfect his art. The expected option, at that time, was that he would travel to Paris, the place-to-be for contemporary artists, but the young Abildgaard decides to go to Rome, birthplace of classical art or, to say it in other way, centre of the art world 300 years before.

He remains in the Italian capital city until 1777 and he devotes himself to study Raphael, Titian and Michelangelo. But he also takes interest in other areas like architecture and decoration, at the same time that he furthers his knowledge on mythology, antiques, anatomy and perspective. There in Rome he meets Henry Fuseli, a Swiss artist.

Is Fuseli who, in 1781, finishes a painting called The nightmare. And, basically, Abildgaard copies the concept. But of course, the aware reader of the blog would realize that Fuseli finishes the canvas, at least, 4 years after known Abildgaard, so that’s why I think that Fuseli had already in mind the concept of the painting in Rome and would comment it with Abildgaard… it doesn’t matter: the Dane, although not very creative, in my opinion, finishes with a painting much more dramatic and effective than Fuseli’s.

In it, we see a couple sleeping naked in a bed. In the foreground, we see an incubus, it is, a kind of male demon that lays over women that are sleeping in order to have sex with them and procreate. The woman at the front sleeps in an odd position, which makes us think that she is dead; but the tranquility of her partner in the back confirm us that she is only sleeping.

The atmosphere of the painting is disturbing. The dark tones and the situation in which the characters are, is scary. Even, the disgusting furry incubus stares at us, innocent lovers of the impressionism, with those penetrating and red eyes, which tell us that we are the next victims of his machiavellic plans.

Lots of psychology writers based on Nightmare to explore dreams and their relation with unconscious fears. I personally think that this is a masterpiece: it moves us, it is scary and we cannot be indifferent to it. Way to go, Abildgaard!

This entry was posted on September 9, 2010 at 09:53 and is filed under Romanticism.You can follow any responses to this entry through the RSS 2.0 feed.You can leave a response, or trackback from your own site.