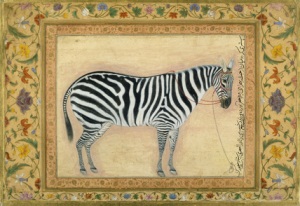 Like our known Bichitr, Ustad Mansur also belonged to the court of the moghul emperor Jahangir Kahn. However, while the first painted to symbolically extol his emperor, Mansur devoted himself only to the painting of exotic animals, for the emperor to know more of that world he couldn’t have access to. Among his work, we can highlight the painting of dodos, Siberian cranes or, in this case, a zebra, an African mammal completely unknown for the 1600 India. We see it in the painting tied up like a horse, which make us guess that Mansur didn’t travel to the African continent, but that the zebra was captured in one of the commercial missions that were made to there. We can notice the poor animal’s head hanging down and remind us the work of Pietro Longhi of a rhinoceros in the same situation.

This entry was posted on October 28, 2010 at 09:09 and is filed under Realism.You can follow any responses to this entry through the RSS 2.0 feed.You can leave a response, or trackback from your own site.