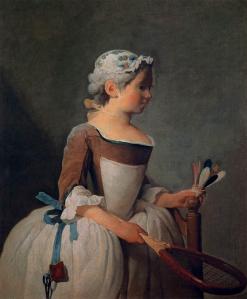 Call me judgmental. I don’t mind. But if I look at Chardin’s self portrait, I really think that there is something weird going on with him. At least. I’d immediately think in an eccentric person (fond of drag queens) which cares very less for conventions. But I would be wrong… in fact, the motifs of Chardin’s paintings are among the less revolutionary that we can find: simple still lives and portraits from every day characters.

As a young artist, Chardin lived a modest life selling his still lives to customers. But he didn’t set the price, but allowed the buyers to choose how much they were going to pay for a work. For this reason, in his time, he was known as “the good Chardin”.

Despite regularly exhibit in the Paris Salon, the neoclassics of that time hated the artist’s painting as he worked usual, simple and almost naive motifs.

As we were saying, the painter, in his first years, only devoted himself to still life paintings, but then he had to work on a different motif, as he was granted with a pension from Louis XV: portraits of the wealthy. So he did and today we see a work of that time: Girl with racket and shuttlecock.

Here we can see the portrait of a girl with a badminton racket and a shuttlecock. The tones of the work are soft and subtle. The pink skin of the character is flat and makes a contrast with the texture of the skirt. Looking at her red cheeks, we see the innocence of the girl who, with an impatient look, seems tired to pose for the artist. It would seem like, the only interest she has, is to go out and play.

This entry was posted on December 7, 2010 at 10:18 and is filed under Rococo.You can follow any responses to this entry through the RSS 2.0 feed.You can leave a response, or trackback from your own site.