Self portrait in the green Bugatti | Tamara de Lempicka | 1925 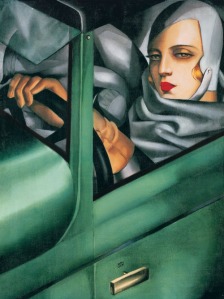 Self portrait in the green Bugatti | Tamara de Lempicka | 1925

Maria Górska was born into a wealthy family that was always associated with the Polish upper class. In 1911, the whole family travels to Italy, and there the girl decides to devote herself to painting. After the divorce of her parents, and her mother’s remarriage, the impulsive teenager decides to leave the family home. She meets Tadeusz Łempicki, the man she will marry three years later. She will take his last name and thus create her artistic alias, Tamara de Lempicka. Together with her husband, the artist migrated to France and began to assist to parties and events to bond with the Parisian elite, who are the ones that will buy her paintings and allow her excesses and whims.

The art scene of the time was turbulent: art nouveau was popular until the 1920s, the decade in which art deco prevailed. While art nouveau emphasized the forms of nature and romanticism, the art deco was precise, urban and elegant. De Lempicka’s style during this period was unique: her stylized and ethereal portraits contrasted the rigidity of art deco painting. The artist used flat colors and abrupt plays of light and shadows. Some even say that her paintings could be categorized as a “soft cubism”.

The Self portrait in the green Bugatti of 1925 is probably her most known painting. De Lempicka painted this canvas commissioned by a German fashion magazine called Die Dame for a cover. Many believe that this painting is a tribute to the dancer Isadora Duncan, who died in a car, strangled when her scarf became entangled around the rear wheel. But the painting by De Lempicka was completed two years before and, therefore, couldn’t have any connection with the tragic event.

This painting is simply a self-portrait in which the artist shows herself free and independent. At that time, it was unusual to see women driving cars. Her half-closed eyes give her an indifferent but astute expression. This is the portrait of a femme fatale. The violent play of light and shadows can be seen in her dress, which has lighted areas almost white which, immediately, become completely black in the dark. This contrast makes the painting both cold and dramatic, characteristics typical of all De Lempicka’s paintings.

This entry was posted on November 22, 2012 at 14:27 and is filed under Uncategorized.You can follow any responses to this entry through the RSS 2.0 feed.You can leave a response, or trackback from your own site.